Hewden machines go under the hammer

More than 100 cranes and thousands of items of general construction equipment from the fleet of the failed Hewden Stuart are being sent to auction. 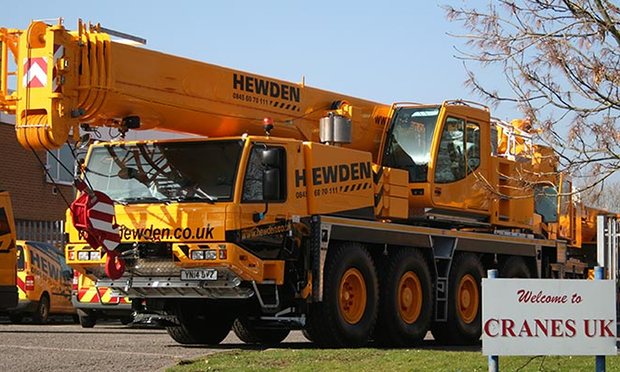 Administrators from Ernst & Young have appointed Euro Auctions to dispose of the assets of HS Realisations, the new name for what remains of Hewden since the brand name has now been sold.

Hewden Stuart entered administration on 22nd November 2016. A-Plant paid the administrators £29m for the brand name and some niche parts of the business, including the powered access and power generation fleet and the Interlift lifting and materials handling business.

Other deals have also been done.

General plant depots in Warrington and Bangor were sold to Cheshire-based hire firm Ashbrook Plant in December, and the Brighton depot to GAP in the same month. Nixon Hire announced today that it had completed the acquisition of Hewden’s Nottingham depot shortly before Christmas. It is also understood that former Hewden depots in Inverness and Whitehaven have been looked at closely by Morris Leslie.

However, it seems that no suitable buyer has been found for one of Britain’s biggest mobile crane hire business. All cranes not being returned to manufacturers under finance terms are going to auction.

Euro Auctions has been working with the administrators to locate, catalogue and assess all assets of the business, tracking cranes and construction equipment and in many cases assisting in repatriating them to a secure depot.

Joint administrator Sam Woodward said: “We are delighted to be working with Euro Auctions on the disposal of the crane and construction machinery assets of Hewden.  We look forward to working closely with the Euro Auctions team over the coming months and maximising returns for creditors.”

The disposal will be conducted in two phases starting this month and is expected to be completed by the end of April 2017.

Euro Auctions will start the disposal process by inviting bids for approximately 127 mixed cranes and pieces of lifting equipment that are now stored at various depots of the Hewden business around the UK. The disposal sale will be conducted by tender and bidders expressing interest in participating in the sale can do so by contacting Euro Auctions on 02882 898262.

Euro Auctions will sell thousands of items of general construction equipment at a series of unreserved auctions over the next four months. The sales will be held at Hewden depots across the UK in early January with the disposal culminating in a final sale at Euro Auctions’ 60-acre sale site in Leeds later in 2017. The location of the various sales has yet to be confirmed. The inventory will include excavators, dumpers, rollers and telehandlers. Special interest is expected in a large consignment of 2015 and 2016 machines, many of which are still in warranty.

“All the equipment going under the hammer has been exceptionally well maintained and we expect real interest as it’s all being offered without reserve so buyers could pick up some real quality bargains,” said Euro Auctions’ David Betts.